EA announced that in the next few days, on December 4th, 2020, it's going to launch FIFA 21 on Next-Gen consoles, i.e. PS5 and Xbox Series X and S. In this article, we will have a look at the advances and technologies we are going to see in FIFA 21 on those consoles. Unlike other articles about FIFA 21 on PS5, this article is based on the technology presented by EA.

We will discus DualSense™ which is used in PS5 haptic controllers and improvements in visuals and gameplay. Are you ready for the excitement of winning and making FIFA Coins?

With Play Station 5 and Xbox Series X, the load time of FIFA 21 will be really fast and when we say fast, we're talking about loading times under two seconds! That means you're in the home screen now and (if you use Activity Cards on PS5) in two seconds, you'll be playing a game in FIFA 21!  So, it's a bummer for those who like to practice while waiting for the game to load!

The loading of course is super fast for both Play Station 5 and Xbox Series X, but PS5 users will have an advantage which is called Activities which makes it possible to get you into the game much faster.

You will be able to migrate your progress in FUT and Volta from PS4 to PS5 and from Xbox One to Xbox Series X or S and vice versa. And the transfer market will be cross-gen which doesn't matter if you buy the cards from a PS4 owner or PS5. You have complete freedom and flexibility.

The new technology DualSense™ Haptics used in PS5 controllers makes a true immersion feeling possible where your fingers will sense the haptic feedback on the controller which allows you to interact with the game at a higher level.

Imagine you're shooting the ball to score or jumping to block the ball to save a goal, the DualSense controller has haptic feedback that signals to your hands based on the response it gets from the game to let you feel more engaged in the game on your fingertips. With the level and location of the haptic feedback, you will be able to detect a power shot or a coming tackle towards your player. If the haptic feedback is on the left hand, it means it's coming from the left side and likewise for the right hand controller. DualSense has adaptive triggers technology. That will allow you to increase trigger resistance when the stamina or other qualities drop. In other words, you will watch the players' stamina and fitness status through the game. And this is presented by PS5's DualSense which will be used in FIFA 21, that makes the football experiment as realistic as possible.

RPMT stands for Real Player Motion Technology and is presented in Next Generation FIFA 21 to bring extra realism into the game with extended player interaction moves. So, the physics is improved to fight for ball possession while playing football as well as pushing and pulling. When you want to focus on winning to make FIFA 21 Coins, this new RPMT technology will come in handy.

Basically, you should see significant improvements when a strong attacker holds the ball, when trying to catch the ball in the wings, when you're trying to stand for catching the air ball, etc.

Advanced Visuals in FIFA 21 on Next Gen Consoles

One of the most obvious improvements in Next Gen FIFA 21 is realistic visual effects and details of players and stadiums. The lightnings, shadows and live fans sitting in stadiums, everything is revolutionized in PS5 and Xbox X. 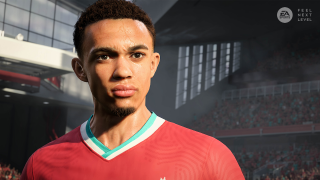 With LiveLight Rendering technology, we can have super realistic lightning and atmosphere in PS5 and Xbox Series X while playing FIFA 21. Stadiums such as Santiago Bernabéu or Etihad will show amazing details now that there are not physical limitations for it. It will give you the real feel of playing football in a real stadium.

As you can see in the picture, LiveLight technology also emphasizes on more realistic details on the faces of the players, and for now, the most detailed players are Kylian Mbappé and Trent Alexander-Arnold. The muscles while kicking the ball, the strand-based hair that moves with the flow of air while the player is running or turning, the results are stunning like you've never seen before!

With GameCam you'd go deep into the stadium's atmosphere when someone scores, just like the image below. The reaction of the home and away fans when a score happens or a ball is missed is amazing through this camera.

Improved players' move in FIFA 21 for Next Gen Consoles

With advanced hardware of consoles, the players can move more realistic and natural. It's related to their moves off-ball, the animations that makes them like real players.

With over 700 new animation combinations, the new gameplay technology makes the pleyer's movement super realistic. The animations are responsive and Multi-Touch that will emphasize on the players contextual touches that resembles the real moves in the field in real life.

The improved collision detection system will also make it more real when two players are running shoulder-to-shoulder to possess the ball. The interactions you'll see as well as the visual quality is improved when two players fight for the ball. With this level of details, it would be much easier to win games and earn enough FUT 21 Coins to buy great players for your team!

In the next generation FIFA 21, you'll notice the difference when the players clean the sweat from their face or shout to their teammates for sending a ball, or catching their breath after running at the end of he match. The gestures are also significantly improved when for example the score is in favor of the team or the other way around. The combination of gestures and animations is too many that the spontaneous reactions of the player will make it too realistic in Next Gen FIFA 21.